How Sharing Economy Will Change the Business in Europe

In our time of technology’s dynamic growth and development, we are experiencing a fundamental change in the way we interact with each other and the world around us. The rules are evolving, and the boundaries are erased as innovative startups give us a glimpse of the near future.

By now, sharing economy ceased to be a novelty and became a stable trend instead. Positive forecasts and rapid growth pace in this area attract the attention of experts and ordinary consumers. 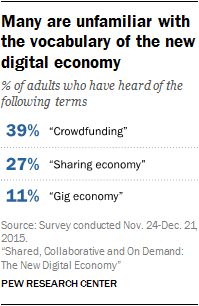 Sharing economy growth is changing the face of European business as well as companies around the world, creating new opportunities for new entrepreneurs and, at the same time, challenging those who have been on the market for some time now.

A recent European Commission study showed that over the last two years, the activity in the collaborative economy sphere across Europe almost doubled if compared with the data from 2014. In 2015 alone, this economy sector generated nearly €4 billion in profit and made possible €28 billion worth of transactions.

Will sharing economy in Europe hold up the dizzying pace of growth over the next decade?

Experts believe that with such major players as Uber and Airbnb that are intensifying their efforts to increase the geography, the growth of shareconomy can be expected to be a trend.

Some of the most ambitious evaluations claim that in 10 years, many sharing economy businesses will compete with their conventional counterparts. In particular, the most popular sectors will generate Europe-wide annual revenues in excess of €80 billion, providing transactional revenues of €570 billion.

Granted, there are risks for the companies operating in this market. In particular, they will have to overcome the problem of trust and to promote the idea of the sharing culture. Nevertheless, Europe has all the chances to become a global innovation incubator for the sharing economy businesses.

Researchers identify five key sectors of the sharing economy that facilitate transactions in P2P and B2P using the Internet as a platform.

One of the reasons for the stable growth and maturity of the sector is due to it being the default choice for many young consumers. For example, a recent survey has shown that one-third of 25-39-year-old Europeans used the collaborative economy services, the main ones being the Uber and Airbnb. The older generation (55+ years) is less prone to such innovations. At the moment, their activity in the sharing economy sphere is three times lower.

Perhaps one of the most remarkable achievements of the shareconomy is that their model of sharing things affects consumer behavior, how they move around the city and between cities, how they travel (allowing for greater freedom due to accommodative services), and encouraging the new generation to travel more often.

Transport sharing sector is the largest one in Europe regarding profits. In 2015, the profit of this area amounted to almost €1.7 billion. At the same time, accommodative industry ranked first for two years regarding transactional revenues, totaling €15 billion in 2015. This is why Europe has become a major area for co-location providers’ growth. European region now accounts for over a half of the Airbnb global locations.

On average, about 85% of the transactional value in the sharing economy conditions go directly to the people who are providing services, not the platforms. Revenue models used by platforms vary considerably between countries and even within sectors. However, most of the use the approach based on a fixed or variable commission. Fees range from 1% - 2% in the financial sector, up to 20% in the transportation sector. Thus, the platforms have worked out a sustainable model of converting income into profit, and their profitability has increased in the majority of maturity markets. At the same time, if the platform proves its stability, it cannot survive the next stage without significant investments to be able to attract new customers.

Over the next decade, the growth rate of the sharing economy will look like a bright spot against the backdrop of moderate growth of the “normal” economy across Europe. Experts predict a rise in the profit level of about 35% per year, which is ten times faster than those indicators of general economic growth (which is expected to be around 3%). By the end of 2025, four out of five abovementioned services (except for professional services segment) is projected to generate revenues of more than €100 billion per year.

Studies show that transport direction in the sharing economy will remain to be the largest sector in the sharing economy throughout Europe up to 2025, accounting for over 40% of the total profit among the five key areas. The industry can also pose a serious threat to the future of traditional transport services (taxis), becoming their real competitor.

At the same time, the fastest growing area will be providing personal services on demand. The rate of profit growth in this sector, according to experts, will be approximately 50% per year until 2025. Besides, analysts predict that in the next decade, household services sector will bypass the accommodation industry regarding revenue in Europe.

There are cities and countries in which the authorities and competitors prohibit the existence of such services. Uber and Airbnb have lived through the most vigorous protests at the beginning. Uber caused a powerful protest action from taxi drivers, who accused the service of predatory pricing, especially because in some countries the taxi driver license price is quite high, which causes the prices to go up as well. As for Airbnb, the hotels, and lobbyists that work in this sector of the economy have repeatedly protested against the service in different ways - from increased taxes for those who rent out their housing to the prohibition of accommodation rent without a license and insurance.

At the same time, the number of sharing economy companies is approaching 300 in Europe alone. Among the leading countries in this area are France and the UK, which have over 50 such companies each. In Germany, Spain, and the Netherlands, around 25 shareconomy companies are operating in each country. Governments in these countries also contribute to this contributing economy process by helping with the legal framework. France, for example, issued a law according to which any citizen can rent out their home without having to ask for the permission from the mayor’s office. Such help is among the key factors that affect the growth of this sector of the economy.

Which sharing economy services do you use in your daily life?

We have worked with sharing economy projects.

Check out our expertise!

Katerina has over 3 years of experience in IT outsourcing companies as a project manager. During this time, she has worked with over 80 projects (mobile as well as the web) for clients from Ukraine, Israel, Spain, Canada, the Netherlands, and other. She loves solving puzzles when it comes to development as well as real life and likes Quest rooms and yoga.
Facebook
Google+
LinkedIn
Twitter